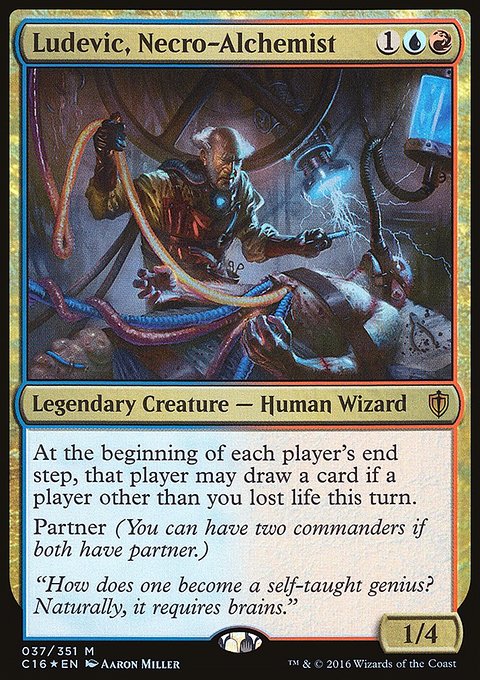 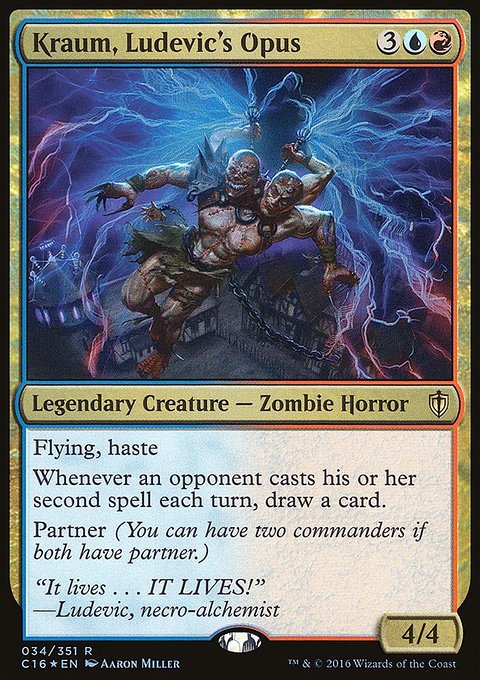 I am a runaway from the Kingdom of Denmark. I lived with my Czech wife, Marie in Denmark for seven years before moving to the Liberec region in 2017.

Magic wise, I started playing in 1993, Revised and Antiquities was out back then. The foil cards in Mercadian masques and Urza’s made it seem a little dumb to me 😀 and eventually the interest faded to other areas –  so I had something like a 15 year break.
Coming back to magic however is definitely one of the best things that’s happened to me. This occurred in 2015 when I had to give up sports and wanted to still compete in something.

I like the format Duel Commander and I ended up with Ludevic/Kraum after several bad choices. The deck is always strong – I never feel like I have no chance in a matchup, although of course, some feel a bit unwinnable.

Finally making it to top 8 in Duel Commander was a great personal success for me, having placed just outside the top 8 for many tournies now.
Mainly, and a bit surprisingly, my deck nemesis has been white weenie (and now, also Winota), so seeing my opponent flash an Isamaru in the very first round made me a bit shaky.

Luckily, I had been doing playtesting with my good friend Ondra Crkva for a long period now, and on his advice, I had added sweepers, which made the matchup feel much better. I wanted some sweepers that had other abilities and/or were one-sided and so ended up with adding: “Wash Out”, “Sudden Demise” and Slagstorm. The Sulfur Elemental also made its way into the build – mainly because of the flash ability.
Ondra had spent the night at our house and so we were sort of ready to head for Pardubice at 7:30. I was feeling very tired due to some sleep deprivation, but we had a nice drive nonetheless and arrived at “U Kapitana” in good time.

G1 (W): had a nice starting hand with grim lavamancer and a mental misstep. Drew Fiery Confluence and proceeded to prepare the wipeout.
After the sweep, opponent still had Gideon, but Kraum finished the planeswalker and opponent was out of resources.

G2 (L): Opponent changed to Thalia as his commander.
Great hand, but with only 2 lands. I never saw the 3rd one and promptly lost.

G3 (W): Grim Lavamancer backed up by mana leak and mental misstep was a great starting position and I was unchallenged, able to bring in both commanders for a lot of pressure and sealed the deal.
Opponent had a comeback chance with Palace Jailer, but I had the mana leak for it.

G1 (W): I am getting outgrinded by opponent’s value cards, but Spectral sailor is the hero of the day, with an amazing 7 card draws and 7 damage dealt! Opponent has Cling to Dust but fails to get creatures in the graveyard and slowly, slowly his life points are reaching a critical point.
With Ludevic finally in play, I protect him on my turn with Young Pyromancer in play and when he casts Angrath’s rampage in his own turn, I sac Ludevic to deny him the card draw.
After many, many rounds, Fiery Confluence is able to hit for 6 to finish it.

G2 (W): Slow hand with 4 mana. Not the greatest, but being on the draw again I figure we will have another long match. Unfortunately I keep drawing a lot of mana so it’s up to the two commanders to keep up the pressure until something else comes along.
I misplay the magus of the moon into an already known Anger of the Gods. The only good thing about this is getting the card out of his hand, but I was running behind the whole game, opponent all the time on the brink of gaining control over the match.
Nimple Obstructionist got an opportunity to shine when I got to cycle it to counter Liliana’s sacrifice ability. Generally I was very happy with the Obstructionist throughout the day.
Eventually Kraum got opponent to 1 and then Ramunap Ruins managed the last bit.

G1 (W) Very tight game. Opponent manages to ramp and I find no counterspells at all. Thankfully Warkite Marauder allows me to push damage through an otherwise huge Multani with reach, turning him into 0/1 when I attack.
Kraum let’s me draw a very crucial FoW against crop rotation which would otherwise have allowed my opponent to search up the glacial chasm.
I survive enough turns to get him down to two life. Then Ramunap Ruins for the win again! Opponent had lethal next turn.

G2 (W): 2nd game was much less exciting as opponent is forced to mulligan to 5. I manage to slow him down while applying pressure. Blood moon handles a desperate Glacial chasm and I am on to round 4 with 3-0.

G1 (W): This could be one of those matches that feels pretty bad… After some quick pregame advice from a friend, I try to come out blazing. Finally winning a die roll, this helps.
I start the game with no counterspell in hand, but some good pressure.
Unfortunately opponent answers my delver with a collective brutality and takes my ponder as well. I am pretty much blanked at this point in the game with nothing on the board.

Luckily opponent fails to land a 2nd creature and is very slow in assembling the necropolis.
In the final turn, I miraculously topdeck a cyclonic rift, bounce Hogaak, survive and swing for the last 5 damage, staring down a horde of creatures on my opponents board.

G2 (W): I have spell snare, snap and Tale’s end in hand and feel pretty comfortable. But, I underestimate the speed of my opponent’s deck and he lands a turn three Hogaak out of the blue, while I used my turn 2 to get a lightning stormkin in play (why flash creatures are better than haste creatures).
The snap buys me enough time to get Kraum online and run away with game 2.

After a nice rest, some card trading and food, I feel very ready for the quarterfinal.

G1 (W): I am absolutely all in on a Blood moon, backed up by Force of Negation. I hide the bloodmoon with a brainstorm but opponent casts Hymn, forcing me to counter it, as he might hit my only red source.
Opponent is tapped out in my turn 3. I draw and cast the Blood Moon and the game is over.

G2 (W): Very long first game where I draw too much land. This does however allow me to recast Ludevic AND Kraum three times!
Mystic Confluence lets Honza almost take over the game, but he is struggling to find the right answers and eventually a snap lets me bounce Kess and deply Kraum for 11 mana and swing for the final hit.

G1 (W): This first game is a real slugfest, with blows being exchanged all through a very fast match. I manage to answer Anafenza with FoW and push enough damage to take first game.

G2 (L): Much the same pattern, but this time Anafenza is in play and she is very hard to deal with. I underestimate the effect of the +1/+1 counters and eventually I am surprise killed with an Alpha strike.

G3 (L): Great hand on the play – 4 creatures, 3 lands – Magus of the Moon in hand. But, opponent has inquisition (nobody expects the Spanish Inquisition!) for the Magus and then he lands a mana dork to solve his own mana issues.
Blows are again exchanged and once more I fail to answer Anafenza. A late Blood Moon almost gets there, but opponent has plains and one card left in hand, which is Enlightened Tutor. He finds Jitte and it is impossible for me to handle. Very close game – definitely the one that made me sweat the most for the entire day!
GG!